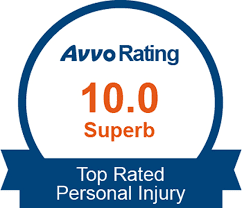 Justin King is recognized as one of the preeminent personal injury litigation attorneys in the Inland Empire.  Justin has built his reputation, one case at a time, by vigorously and compassionately representing injury victims against insurance companies and Justin has achieved numerous six and seven figure results for his clients.

Justin has an AV Preeminent Peer Review rating from Martindale-Hubbell which is the highest rating a lawyer can receive for legal ability and ethical standards and is reserved for just 8 percent of lawyers nationwide.  In 2015, Justin was named by the National Trial Lawyers to its list of Top 40 Under 40 Civil Plaintiff Lawyers and in 2016 the National Trial Lawyers named Justin to their list of Top 100 Civil Plaintiff Trial Lawyers.  In 2017, Justin was named a Southern California Rising Star by Super Lawyers Magazine and as a Top Attorney in Southern California (Rising Star) by Los Angeles Magazine.

Justin began his career as a class action attorney, representing California consumers who were victimized by corporate price fixing.  Justin then spent several years as an insurance defense attorney where he defended numerous personal injury matters to trial and became intimately familiar with the litigation tactics of the insurance industry.  Since that time, Justin has dedicated 100 percent of his practice to representing injury victims and their families and has made his name obtaining great results for those who have suffered catastrophic injuries as a consequence of someone else’s negligence.

Justin attended Claremont McKenna College and the University of California, Hastings College of Law.  He is a member of the Board of Directors of the San Bernardino County Bar Association, the Western San Bernardino County Bar Association, the Consumer Attorneys of California (Inland Empire), and the John Lewis King Memorial Scholarship Fund which provides legal scholarships to law students.  In addition to being a member of the State Bar of California, Justin is also admitted to practice in both the Central and Northern districts of the United States District Court.

According to Justin, “being an advocate means dedicating everything I have to my clients and putting my heart and soul into each and every one of their cases.” When asked how he sees his firm, Justin responded, “injuries can shatter lives and they can shatter families.  My firm is here to help those who have suffered tragedy obtain justice, fairness and compensation and to help them put their lives back together again.”